Richard Proudfit - The Man Who Started It All 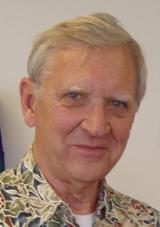 Richard was born and raised in St. Paul, Minnesota, his father a chef and restaurant owner. He attended a private boarding school where he excelled at basketball. After high school, Richard attended the Merchant Marine Academy at Kings Point majoring in engineering and business. He got his appointment to the academy by walking into the commandant’s office and refusing to leave until he was admitted, thus beginning his life-long habit of never taking ‘no’ for an answer. He completed his service in the merchant marine sailing around the world on cargo ships, a time he still remembers fondly as a great adventure.

Once back on land, he was preparing young men for entrance into the Naval Academy at Annapolis, Coast Guard Academy, West Point and his alma mater, Kings Point, and married Marcie, who had waited patiently for him the years he was at sea. His career took a new direction when he took a job as a salesman for an injection molding company and quickly became their highest producing salesman. Being an entrepreneur and risk taker at heart, he saw the opportunities in the high growth injection molding industry of the 1960s and started his own business. Like the entrepreneurs of folklore, he literally started his business in his garage. Over the next 20 years he grew his garage start-up into a multi-million dollar business with 6 plants across the United States. 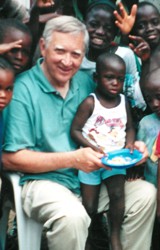 Richard’s grand obsession with feeding the starving children of the world began in 1974 in Honduras after Hurricane Fifi killed or left homeless thousands. He went there as an engineer with a medical relief team to help the survivors of that disaster. At first, Richard was so busy with his engineering and repair work that he did not see the misery all around him, and then something happened that changed his life forever. He recalls that time, “It wasn’t long until I began to see the children - literally dying around us. One mother came to me crying, carrying her near dead child, pleading for help. That is when the Lord broke my heart and brought me to my knees and I knew that I had to come back to do something about it.”

The vision: compassion meets innovation
That encounter with starving children in Honduras completely reshaped Richard’s life as he took on God’s charge to feed the starving children of the world. Richard was the perfect vessel for the mission that fell to him because of two characteristics that most define him - compassion and innovativeness. Anyone who has spoken with Richard about his experiences of watching children die from starvation and malnutrition-related diseases knows the intensity of his compassion for those children. Likewise, those who work with Richard know that he is an obsessive improver. As an instinctual engineer, he constantly tinkers, experiments, and tosses out ideas for ways to make things work better, faster, cheaper. The confluence of these 2 traits makes Richard the perfect social entrepreneur. Tracing the steps of the development of Kids Against Hunger reveals 3 key innovations that Richard used to create Kids Against Hunger. 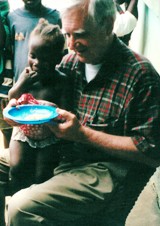 A simple, but nutritionally powerful food
Richards’s early attempts to feed children using surplus foods from food distributors and manufacturers were unsuccessful, but like all single-minded entrepreneurs, he never gave up and kept attacking the problem from a new angle. His breakthrough came when he met with several food industry executives in Minnesota and asked the simple question, ‘What would be the ideal food for starving children?” The executives put their food scientists to work and began testing various formulations of a highly nutritious dehydrated food package. Richard tells the story of testing one of the early formulations of the food with Indian children who lived on the Calcutta city dump (not near, but on the dump). The children had trouble keeping the food down because it was too rich for their starved bodies. From this experience and others, the formulation was refined so that it could fill the basic nutritional needs of virtually any child while accommodating the broad range of cultural tastes and religious prohibitions found around the world. The beauty of the food formulation is its simplicity. It is made from four readily available, dry ingredients (rice, soy beans, vegetables, and a vitamin-mineral mixture) that are easy to package, keep for long periods, and requires only boiling with water to prepare. Despite the simplicity of the food’s content, it is a nutritionally complex and well balanced meal.

Richard did not stop at packaging the food and then sending it off with hopes it would find its way to those he calls, “the poorest of the poor”. He traveled to dozens of countries in Africa, Asia, and South and Central America to find the missionaries, NGOs, and relief groups that had the integrity and savvy to get the Kids Against Hunger food out of the port, across near impassable roads, past corrupt government officials, and into the mouths of those who are most often overlooked and ignored in their societies. His tireless relationship building resulted in a world-wide network of organizations that can successfully distribute the food under the worst of conditions. 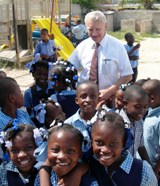 A low-cost, rapidly expandable production system
Richard always knew that his vision required a vast food packaging capacity to meet a seemingly endless demand for food. At first, he attacked the capacity problem by setting up a food packaging facility in Minneapolis, Minnesota. Thousands of volunteers from churches, schools, businesses, and civic groups came to the facility to hand-package hundreds of thousands of meals. But soon the physical constraints of the facility prevented any further growth in production. With his typical determination he found a way around the capacity roadblock with his food packaging satellite concept. Kids Against Hunger satellites are a growth strategy that allows the organization to continuously expand the food packaging capacity of Kids Against Hunger. The concept was simple enough; enlist other individuals and groups who were passionate about feeding children by licensing the Kids Against Hunger name, food formulation, and packaging process to them. Richard the entrepreneur would expand his base by building a national network of food packaging satellites powered by the energy and funds of other social entrepreneurs like him. To date, he has launched more than 90 satellites in the USA and Canada, each a 501(c)(3) nonprofit corporation, all using the same manual process to package the standardized food formulation for distribution to dozens of countries all over the globe. In 2010 alone, the network was packaging over 40 million meals for children. 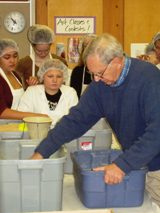 The unplanned, but very real, beneficiaries of Kids Against Hunger are the volunteers who package the food. The manual food packaging process not only feeds many children, it also brings satisfaction and deep engagement to the volunteers who package it. For most volunteers, it is the ultimate hands-on contribution that, because of its simplicity, individuals from age 8 to 80 can perform. After two hours of time spent packaging, a group can easily have helped to create several thousand servings of food. At the end of that time they can see the cartons of food they packaged, stacked and ready to be sent off to such nations as Haiti, Liberia, Afghanistan or Nicaragua to feed children. For better or for worse, Americans like immediate gratification, and by volunteering for Kids Against Hunger they can get it in the form of a charitable act. Kids Against Hunger volunteers become very loyal and return many times over a year to package food. They also bring their family members, co-workers, and friends with them, constantly expanding the volunteer base.

Through a combination of creativity, determination, and sometimes luck, Richard was able to develop several key innovations to help realize his calling to feed starving children. Kids Against Hunger is the culmination of those innovations. 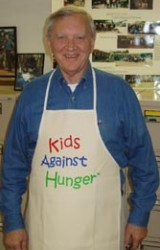 The legacy of Richard Proudfit
There are no small goals with Richard Proudfit. He says his goal, without a trace of doubt, is to ‘mass feed the world’. He knows the numbers are daunting, but big challenges are the ones he likes best. His vision doesn’t stop with children, “Children under five years are especially affected by hunger, but we need to feed mama and papa, and grandma and grandpa too.” Every person who has ever worked with Richard can attest to his burning passion to feed children and the overwhelming sense of urgency he brings to his work.

What does the future hold for Richard and his vision of a world free from hunger? Now in his eighties, he knows that he must build an organization that will preserve and expand on his original vision without him. One major task left to do is to make Kids Against Hunger financially self-sufficient. Until recently he has funded much of the work of Kids Against Hunger out of his own pocket. He supported his growing feeding program by selling his businesses and putting the proceeds into packaging and shipping food to his children. He has no regrets about using his wealth this way, “How many cars can I drive? How many houses can I live in? God has blessed me so that I can bless others.” But Richard also knows that the long-term sustainability of Kids Against Hunger means that it must be able to stand on its own financially.

From time to time Richard is asked about retirement. His response is always the same, “I can’t. My children are dying.”