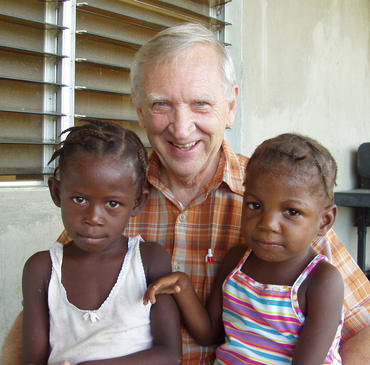 In 1974, Proudfit went to Honduras as a volunteer following a devastating hurricane that hit the country. Profoundly affected by the starvation he saw among the children of that country, he made a conscious decision to commit his life and financial resources towards the enormous problem of world hunger.

Utilizing his knowledge in manufacturing and distribution, Mr. Proudfit tapped his colleagues in the corporate world for help. He enlisted the resources of leading food scientists to develop a highly nutritious meal – rich in protein and fortified with vitamins and minerals – that, when boiled with water, provides nourishment for starving children.

His tireless relationship-building resulted in a world-wide network of organizations that can successfully distribute the food under the worst conditions. Richard Proudfit’s legacy lives on to end world hunger through the network of Kids Against Hunger today.

Darrel and Karen Malcom founded the Kids Against Hunger -Fox Valley satellite in the suburbs of Chicago, Illinois in 2007. They had been trying to find a way to help feed starving children around the world for some time with no luck.
Until they found Kids Against Hunger at a missionary convention. They instantly knew that KAH was “the answer.”
They opened the Fox Valley satellite under their church’s banner as a Bible study with only four couples. They were then offered a space to meet at the BMO Harris Bank warehouse in Roselle, Illinois. (They ended up meeting there for 13 years) “We had to name it so we just named it Fox Valley before we knew where we were going to meet,” Karen said.

With a place to pack and members who supported the cause all they had to do was figure out where to send the food. The answer came when 28 members of their church took a mission trip to an orphanage in Nicaragua.“They weighed their bags and if they were under 50 lbs. They packed some of the food in them,” the couple said. Once in Nicaragua they took the food to the orphanage’s kitchen to use, which opened doors for KAH. We now have a person in South Carolina who loads the meals into containers and then someone from Ohio that drives the food down to Nicaragua once a month.

“Once I was there and saw the need, the need became the motivation,” Darrel said. On Darrel’s last trip to Nicaragua he was with past president Jon Ransdel, who also makes frequent trips to the donation sites. It was about 5 p.m. when they arrived at a house that a church had rented. It was surrounded by walls and within the walls sat at least 125 kids and 30 parents eating the prepared KAH food.“I turned to the pastor and said ‘You know these people pretty well, if it had not been for this food tonight what percentage of them would have not had anything to eat? He looked over at me and said, ‘about 70%.’ He said, ‘If there had been anything for dinner there would be nothing for breakfast.’ ...And that hit me,” Darrel said.

In their first year as a satellite, KAH-FV packed 183,000 meals, a number that has grown to well over 4 million meals served under their watch. Darrel and Karen, power couple with unending passion, tireless effort and amazing team building are why we are still here packing and furthering their vision through this great mission. They are caring mentors that have passed on their passion to local people who are now making a big difference!